You could be due a refund on your LPA fees 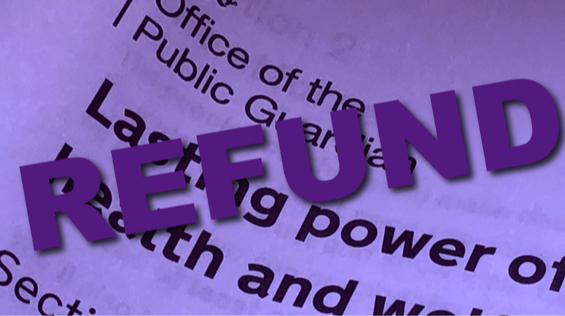 Up to a million people could be owed refunds on their Lasting Power of Attorney (LPA) fees.
Between 1 April 2013 and 31 March 2017, the Office of the Public Guardian (OPG) overcharged for LPA applications.
A year ago the Ministry of Justice started to give refunds to people who had applied for LPAs between 2013 and 2017.
Up to 1 February this year 194,713 claimants had received refunds of more than £12m. However, it’s estimated that 800,000 people could still be eligible to claim.
How did the OPG overcharge for LPA applications?
LPAs must be registered by making an application to the OPG, which is allowed to make a charge to cover its running costs.
For the three years between April 2013 and March 2017 the OPG’s operating costs were reduced but the application fee stayed the same. As a result, the OPG made an £89million surplus.
The cost of applications was finally reduced on 1 April 2017.
Are you due for an LPA refund?
Donors or their attorneys can make a claim if they made an LPA application between 1 April 2013 and 31 March 2017, although the refund will only be paid to the donor.
The amount of refund will depend on what you paid at the time of your application. An extra 0.5% interest will be added to each successful claim.
If you made applications for both types of Power of Attorney, you could be owed up to £108 plus interest.
If you aren’t sure when you paid your Power of Attorney fees, you can still make a claim and the OPG will check records to see if you are eligible to receive a refund
How to claim an LPA application fee refund
Your claim can be made by completing an online form. You will need the donor’s UK bank account number and sort code.
If the donor doesn’t have a UK bank account you can claim by calling the Refunds Helpline on 0300 456 0300. The Helpline can also advise you if the donor has died or you are their court-appointed deputy.
How long does it take for a refund to be made?
It can take up to 12 weeks for a claim to be processed and the refund paid. Once approved, the refund will be paid straight into the donor’s bank account. If your claim is rejected, you can appeal the decision by contacting the Refunds Helpline via phone (0300 456 0300) or email poarefunds@justice.gsi.gov.uk.
You can find out more on the Which? website.
If you haven’t yet set up your LPAs and would like to know more about why they are important, please get in touch.
Tagged as: Lasting Power of Attorney, LPA, Office of the Public Guardian
Share this post: